Spain's capital is a fusion of tradition, culture and ambience. A school trip to Madrid opens your eyes to a heady mix of old and new, captured in its beautiful architecture, landscape and stunning tourist attractions like the arcaded square of the Plaza Mayor, located at the heart of the city.

Pupils lucky enough to experience a school trip to Madrid will be captivated by the cities fantastic art collections found in the world famous Prado, Reina Sofia and Thyssen museums, appealing directly to anyone with an interest in Art or History. For those just wanting to learn more about Spanish language and culture, there is no better way than to immerse yourself amongst the "Madrilenos" and enjoy the vibrant city life.

A sightseeing tour of Madrid will offer your group the opportunity to see the city's main attractions. A professional, experienced, English-speaking guide will give an insight into the history and culture of the city and will be able to answer any questions you may have.

One of the world’s most important museums since it opened in 1819, this massive collection is a testament to the centuries of devoted acquisition by the Spanish monarchy and the church. This neo-classical building, located on one of Madrid’s most attractive street in the “Art Triangle”, is home to more than 20,000 works of art of which only around 1300 can be displayed at any one time.

Ronaldo, Zidane, Figo, Roberto Carlos, Raul…David Beckham. Discover the emblematic Bernabeu Stadium, home of the Real Madrid Football Club, from the VIP box to the changing rooms, from the pitch to the Trophy Exhibition. The Exhibition of the Best Trophies offers a full tour of the legend of Real Madrid. All the European Cups are on show, as well as the rest of the Club's trophies and the most important matches of its history in a modern audio-visual room.

Also, in the "Art Triangle" and formerly the San Carlos hospital, the Reina Sofia was remodelled in the 1980s, becoming the principle location in Madrid for national and international exhibitions. The permanent collection is almost exclusively of 20th century Spanish art, with works by many of the most important artists, including Picasso’s Guernica.

Visit two magnificent Castilian cities in one day, beautiful fortified Avila and ancient roman Segovia. Avila has a perfectly preserved mile and a half of medieval walls with 88 watchtowers and nine gates which encircle the town. Segovia has the spectacular Roman Aquaduct running through the centre and is also home to the most spectacular castle in Spain the Alcazar.

See Madrid from a bird's eye view on the Teleférico. The cable car carries you above the city's parks and a recorded commentary describes the view. Many of the city's famous sights may be seen from the cabins which reach a maximum height of 40 metres.

This fabulous collection of paintings is housed in the 19th century Palacio de Villahermosa in the “Art Triangle”, which was completely remodelled by Rafael Moneo specifically to be a home to nearly 800 paintings. Begun in 1920, the collection contains fine examples of Italian primitives and works from the English, Dutch and German schools.

Toledo is only an hour from Madrid and is one of the oldest and most beautiful towns in Spain, surrounded on three sides by the deep gorge of the River Tagus. Highlights include the towering fortress Alcazar and its ring of Gothic and Moorish walls. Include a stop in Aranjuez, the palace which once served as the official spring residence of the Kings and Queens of Spain.

Las Ventas is one of the most impressive buildings in Madrid and with a 23,000-seat capacity, it is the largest arena in Spain. If you’re interested in this deeply-rooted Spanish tradition a guided tour of the bullring will give you the history and legend of bullfighting and an understand of what fighting a bull in the ring is like.

Situated within the “Art Triangle” and one of the oldest museums in the city, the museum follows the example of the Victoria and Albert Museum in London and was intended to be a place for the education of artisans, craftsmen, artists and connoisseurs of the industrial arts. It illustrates the evolution of industrial or "minor arts", mostly Spanish, including furniture, ceramics, glass, and textiles particularly in the 16th and 17th centuries. The collection contains approximately 70,000 pieces in 62 exhibition room.

This small museum, which was originally the artist's house and was converted into a museum after the death of his widow. It mostly contains Sorolla’s and his family works and is a mixture of post-impressionist and Spanish school art. The house has been preserved in its original state; the ground floor preserved to give the visitor a feel of Sorolla’s life, while the upper floor has been converted into a gallery. 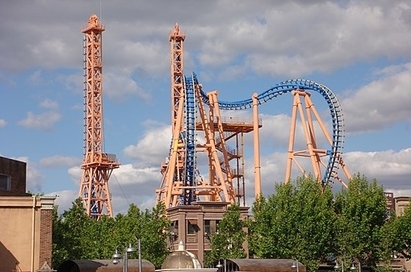 Madrid is now home to Spain’s best theme park, Warner Bros, which brings a real Hollywood flavour to this Spanish city. There are five themed areas to enjoy, adrenaline inducing roller-coasters, a vast array of restaurants, rides and shows for all ages. Get up close and personal with Yogi Bear, Tom and Jerry and even Batman

Miguel de Cervantes was born in this house in 1547.The various rooms contain an interesting collection of paintings, carvings, furniture and decorative articles of Cervantes’ time, as well as an extensive collection of old and new editions of the author’s writings.

We have contacts with different tablados in Madrid who offer shows all year round. Prices are available for either a drink & a show or a diner & a show. Please contact us for more details.

Salamanca is a beautiful and traditional Castilian City. Full of monuments and churches its university is one of the Oldest in Spain. Visit the two Cathedrals, the University building profusely ornamented as well as the famous Plaza Mayor one of the most beautiful Baroque style squares in Spain. Please request prices.

These gardens, a symbol of the enlightened period of the 18th century, formed part of the urban re-arrangement project in the area of El Pardo undertaken by Carlos III, who inaugurated them in 1781. Just like the nearby Prado Museum, it was designed by Juan de Villanueva, and in the different areas visitors will find trees, flowers and plants from all over the world, as well as exotic species in the greenhouses.

The town of El Escorial is home to the Monastery San Lorenzo el Real built during the period of King Philip II. The monastery is the Pantheon of the Spanish Kings as well as a Palace, Monastery and Church. The Valley of the Fallen is an impressive memorial to those who died during the Spanish Civil War.

The Mercado de San Miguel is located in the heart of Madrid’s city centre, next to the historic Plaza Mayor and is one of Madrid’s oldest and most beautiful markets, with its wrought iron and glass walls.  The market is not only beautiful but is also full of food from around the country, making it the ideal place to offer your students a true taste of Spain.

Created in 1774, the Royal Academy of San Fernando is the oldest art institute in Madrid, doubling as a museum and gallery, it is also the headquarters of the Madrid Academy of Art. In addition to paintings of the Spanish school (Juan de Herera, Zurbaran, Goya, etc), it houses over 1,400 paintings, 600 sculptures and 15,000 drawings, as well as an excellent collection of decorative arts objects including tapestries, silverware, ceramics, porcelain, clocks, furniture and medals

This classical style Palace located in the heart of Madrid houses the artistic collections gathered in his lifetime by the XVII Marquis of Cerralbo (1845-1922). Decorated with Neo-Baroque and Rococo elements, it was designed with a dual purpose, as a home and a museum. The museum is made up of over 50,000 objects, including paintings, sculptures, ceramics, glass, tapestry, furniture, coins, medals, drawings, stamps, clocks, weapons, armour and archaeological objects. Visitors can contemplate hundreds of items of historical and artistic value as well as paintings from Spanish masters such as El Greco and Zurbaran.

CaixaForum Madrid is located in a nineteenth century power station and was re-designed by the Swiss architects Herzog & Meuron in a contemporary and avant-garde way. Located in the "Art Triangle" it is a cultural space and architectural work of reference and is laid out in a large square in which a spectacular 24-meter-high vertical garden, the work of Patrick Blanc, where 15,000 plants of 250 different species are planted.  One of the city's great landmarks, this space opens its doors to old, modern, contemporary and multimedia art, debates and educational workshops.

The official residence of Spain’s royal family, this 3,000 room palace, commissioned by Philip V. is truly awe-inspiring. Highlights of this majestic palace include some fine 17th century sculptures of commissioned by Velazquez and the extravagantly ornate private apartments of Charles III. School groups can benefit from a reduced admission charge provided they have identification in the form of a signed letter on headed school/college paper.

Visit the House where Lope Felix de Vega (1562-1635) lived during the last 25 years of his life. The House pays tribute to the Golden Age comedy playwright and poet. Declared to be an Historic-Artisitc Monument in 1935, the House is an example of a restored Madrid family home from the end of the 16th century, with large scale alterations from the 17th century.

Welcome Discount for Every New Teacher

As a teacher/lecturer booking with us for the first time, you can SAVE £30pp on your next school/college trip to the USA and other long haul destinations and £10pp on UK and Europe destinations.

Locate My Trip Included in Every Tour

Locate My Trip is the easy, convenient way for your school to follow your group’s location whilst on tour and, has been specifically designed to provide reassurance to both parents and teachers and is included as STANDARD in all our tours.

For every school and college who take a trip with us, a Maya nut tree will be planted in Peru supporting reforestation and we pledge to offset an additional tonne of CO2 through the Brazilian Amazon deforestation project.  Learn more here.