Belgium is Europe in a nutshell; a great melting pot of culture and language forming the centre of the European Union. Flanders in the north has great art cities such as Antwerp, Bruges and Gent while the capital Brussels is one of the world's most cosmopolitan cities.

For Politics, Business and Economics students Brussels, as the European capital of politics and business and one of the world's most cosmopolitan cities, Brussels is a great choice. It is home to both the European Union and NATO, as well as a wealth of international trade and finance institutions. Brussels is also a hub for science and innovation with excellent visits such as the Euro Space Centre, one of the largest Planetariums in Europe and the House of Science Liege which covers Physics, Chemistry and Biology. For Food Technology trips a large number of firms use the region as a base for production, processing, packaging and operations and students can visit Concept Chocolaterie and In Bev Breweries to see the production in process.

Finally, the beauty of Brussels is intensified during the Christmas Markets season due to all the beautiful and twinkling festive decorations.

Live the life of an astronaut! Learn everything about space and its conquest. Space and its immensity become alive and clear thanks to the magic of technology, light, colours, sounds, images and a special effects.

Because of its canals Bruges is often called 'The Venice of the North'. The water situation in both cities was, however, very different. Venice was founded on islands in a lagoon of the Adriatic sea. Bruges lies deeper inland; at least now, because in the five centuries B.C the Flemish coastline must have been flooded several times by the North Sea. When the waters retreated they left behind different sea-arms via which ships could reach the area where now Bruges is situated.

One of the most beautiful squares in the world, the Grand Place is Brussel's most treasured centrepiece. In 1998, it was selected as a UNESCO World Heritage Site and is an outstanding blend of architectural and artistic styles. The square is surrounded by Brussels’ Town Hall, nearly forty guildhalls and other beautiful buildings from the 14th to 17th century. The 110 by 68 metre Grand Place is also home of the Flower Carpet, a bi-annual event featuring the creation of a colorful carpet design using more than 700,000 cut flowers.

Visits can be arranged to In Bev breweries, including the home of the famous Stella Artois brand in Leuven. In Bev has a portfolio of more than 200 brands, including ®, Stella Artois®, Brahma ® and Beck's ®, its three global flagship brands. In Bev employ nearly 77,000 people, and run operations in 32 countries across the Americas, Europe and Asia Pacific. The visit consists of a guided tour to the brewing hall, the filtration and filling plant and an opportunity to taste Stella Artois.

An excellent tour which includes an explanation on the origin of chocolate and the chocolate making process. The group will then be able to see the production in action. To finish the tour all students will be able to sample the finished product and buy the products in the shop. There is also a workshop to the end of the tour where students can participate in making their own chocolate products.

In the Bank’s museum, you can find out all about the history of different means of payment, the role and significance of money in the economy, the tasks and activities of the National Bank within the European framework, the features of euro banknotes, and, finally, money as a cultural phenomenon.

The Atomium is an impressive 102 metre structure of the nine atoms of a molecule in steel and aluminium. It was built for the 1958 Expo and was not intended to survive it, but its popularity and success ensured its place as a major landmark on the Brussels skyline. The spheres can be visited and contain scientific exhibits. There is also a restaurant and viewpoint in the top sphere.

Visit the site where Napoleon lost the battle against the allied troops commanded by Wellington and the Prussian Marshal Blucher in 1815. The museum is situated in the former stagecoach station where the Duke of Wellington stayed. You can still visit the Duke’s bedroom and the office where he wrote his victory report.

The Port of Antwerp is the maritime gateway for import, export, transit, storage, distribution and production in Belgium. The half-day tour of this large port will show students a video film introducing the Port of Antwerp and will continue with a tour around the lockage, container terminal, steel terminal and exhibition hall.

A behind the scenes peek inside Coca-cola’s high-tech production and distribution center. Alongside the history of Coca-Cola, you’ll discover all the innovation that goes into making today’s soft drinks, and which Coca-Cola job is the right fit for you. And you’ll learn all there is to know about Coca-Cola’s commitment to sustainable packaging and recycling.

The Blegny mine is a heritage of Belgium’s industrial past. An astonishing and educational experience discovering a strange and fascinating world. 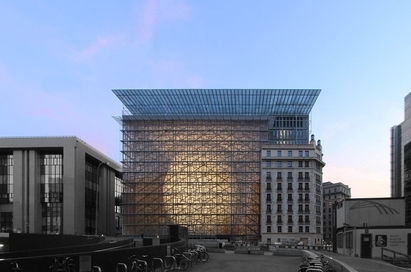 Council of the European Union

The Council of the European Union, usually known as the Council of Ministers has no equivalent anywhere in the world. Here, the Member States legislate for the Union, set its political objectives, coordinate their national policies and resolve differences between themselves and other institutions. Visits must be booked directly by the school.

The auction is the largest fruit and vegetable cooperation in Europe and handles up to 3,000 tons of vergetables per sale day. The experienced guide will talk about the history of the world of auctions, and more particulary about the auction of Mechelen. They will teach you the system of auctions and will lead you through the route of the vegetables – from the market gardener to your local supermarket, and will let you personally witness the sales activity with the auction clock.

Taking place at the Parlamentarium, students can step into the shoes of a Member of the European Parliament and take a fast-track course on how Europe's democratically elected body works. Students will need to negotiate and compromise to build the future they want for Europe during these simulated sessions. This activity is aimed at secondary school pupils.

The beauty of Brussels is intensified during December when the Christmas Market stalls takes over the city. With classic wooden chalets selling traditional arts and crafts, street entertainers, fairground attractions and the smell of sweet waffles in the air, a trip to Belgium offers a true Christmas holiday atmosphere your students will love.

The In Flanders Field Museum is an interactive museum which takes students through the events of the First World War. Students are given tickets which enable them, to follow the history of a soldier, civilian or nurse in the Salient to really illustrate the human experience of the war. Excellent educational resources/worksheets are available.

The Stedelijk Museum voor Actuele Kunst (SMAK) opened in 1999 & contains what is considered to be Flanders’ finest collection of modern art.

The exhibitions and events combine an educational approach with fun experiments to arouse students' curiosity, stimulate questions and encourage them to learn more and develop their critical faculties. The themes covered vary widely: from the human body to genetics, from television to programming a robot... the aim is to see daily life from another perspective, through the prism of a scientific, technical and humanist culture.

Antwerp’s brash, optimistic attitude towards developing new talent is strongly manifested in the high profile art museum MUHKA. Displaying work from the 1970s onwards, the focus is on temporary exhibitions & the strength of the museum is the way space is used in the light-flooded, mostly white-painted rooms covering 4,000 square metres of exhibition space.

Planetarium of the Royal Observatory of Belgium

One of the largest planetariums in Europe where eight projectors immerse you in an impressive image projected onto the surface of the roof of 840 m2. Thanks to a rich astronomical database of over 100,000 stars, it is now possible to travel between planets, flying over the surface of Mars, approaching the rings of Saturn!

This six acre park is situated at the foot of the Atomium monument and has mini statues of all major European monuments including the Brandenburg Gate, Big Ben and the Eiffel Tower. They are exact models on a scale of 1:25.

Over fifty attractions and shows including roller coasters, rides and family entertainment, as well as a large waterpark.

A vast museum housing one of the world’s largest antiquity departments, with a huge collection of artifacts from the ancient worlds of Greece, Egypt, pre-Columbian America and the Near & Far East.

A museum dedicated to one of the major artists of the 20th century. Magritte is the emblematic figure of a Surrealist movement that has left an indelible mark on Belgian national consciousness.

Consists of the Museum of Ancient Art; showcasing paintings of the former Netherlands from the 15th to 17th centuries and sculpture from the 18th and 19th centuries, and the Museum of Modern Art which follows the evolution of art in the 20th century, comprising paintings and sculptures by Belgian and foreign artists from Fauvism to Expressionism, from Surrealism to abstract art and modern trends.

The main part of the museum is devoted to the history of the comic strip in Belgium. The main cartoonist is Hergé, who invented the famous Tintin. The exhibition includes collections of original storyboards by the greatest artists in comic strip genre.

The Rubenshuis comprises the 17th-century house, studio and garden of the famous painter Peter Paul Rubens. Ten works by Rubens including his self-portrait are housed here, along with a variety of objets d’art and utensils, which either belonged to him or date from his time.

As well as the House of Science covering Physics, Chemistry and Biology there is the Liege Aquarium and the Zoology Museum. There is so much on offer here that there is sure to be something for everyone, regardless of taste and age. These attractions are all located within a historic University building, off the Quai Van Beneden.

Living Tomorrow is a unique attraction designed to demonstrate the latest trends and innovations in working and living. Three thematic guided tours are available to illustrate what work and home life will look like in the future; the sustainable development of our planet around water, health, energy, food and natural resources; the future of medicine and health care.

Welcome Discount for Every New Teacher

As a teacher/lecturer booking with us for the first time, you can SAVE £30pp on your next school/college trip to the USA and other long haul destinations and £10pp on UK and Europe destinations.

Locate My Trip Included in Every Tour

Locate My Trip is the easy, convenient way for your school to follow your group’s location whilst on tour and, has been specifically designed to provide reassurance to both parents and teachers and is included as STANDARD in all our tours.

For every school and college who take a trip with us, a Maya nut tree will be planted in Peru supporting reforestation and we pledge to offset an additional tonne of CO2 through the Brazilian Amazon deforestation project.  Learn more here.